Is LGBT Biblically Sound or Not? 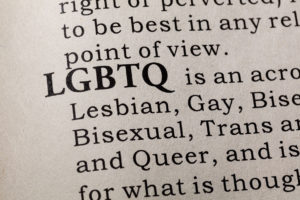 I know this is a sensitive topic for people to talk about openly, but I believe it also needs to be addressed. It’s no secret that there seems to be a divide between those who support LGBT and those who don’t. But can we just stop for a second, and take a closer look at this? What does God think of LGBT? What does the Bible say? Let’s break it down.

I’ve decided to start with homosexuality. We’ll get to transgenderism next. So where can we start? Well, if you look at Leviticus 18:22, it states, “You shall not lie with a male as with a woman; it is an abomination.” (ESV) If you also look at Genesis 1:27-28, it says, “And God went on to create the man in his image, in God’s image he created him; male and female he created them. Further, God blessed them, and God said to them: ‘Be fruitful and become many, fill the earth and subdue it, and have in subjection the fish of the sea and the flying creatures of the heavens and every living creature that is moving on the earth.’” (New World Translation of the Holy Scriptures) God created us male and female. We are to produce as God asked us to, as a man and woman becoming one. Both need each other. God calls lying with another of the same gender is an abomination.

The verses that I placed in the previous point apply just as easily here. God made us male and female. But you could argue that it is still your body, and God gave it to you to use. However, I have another verse that speaks otherwise. In 1 Corinthians 6:19-20, it says, “Or do you not know that your body is a temple of the Holy Spirit within you, whom you have from God? You are not your own, for you were bought with a price. So glorify God in your body.” (ESV) As people, our purpose in life is to give glory to God in everything we do. That includes what we do with our body. In Deuteronomy 22:5, it states, “A woman shall not wear a man’s garment, nor shall a man put on a woman’s cloak, for whoever does these things is an abomination to the Lord your God.” Again, God calls such a thing an abomination. If the Lord says that transgenderism isn’t biblically sound, then how can we give Him glory through it?

God’s View on How to Counter the Urge

Now I think I only have one thing left to say. Yes, LGBT is a sin, but that does NOT mean we condemn those who have fallen into this sin. We are all sinners. We’ve all messed up just as much as the people next to us. As 1 Peter 17 says, “Show proper respect to everyone: Love the brotherhood of believers, fear God, honor the King.” (NIV) We shouldn’t reject each other, rather we should help each other get through our problems.