Is Anger A Sin?

Anger is an interesting thing. It’s very easy to get angry, but to me, it seems hard to understand. Sure, it’s an emotion of some kind, but is this emotion caused by our own sinful nature, or does anger come from God? This is a question that I’ve decided to tackle. So… what does the Bible say about anger? 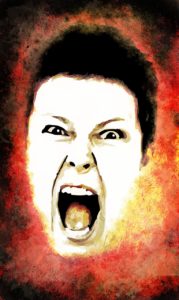 While looking through some verses, I came across plenty that talk about anger. In James 1:19-20, it says, “My dear brothers and sisters, take note of this: Everyone should be quick to listen, slow to speak and slow to become angry, because human anger does not produce the righteousness that God desires.” (NIV) Well, I guess that solves it. It says that anger doesn’t show the righteousness that God desires.

So Anger is a sin. Not necessarily. It says “human anger.” Is there another kind of anger? In Ephesians 4:26-27, it says, “‘In your anger do not sin’: Do not let the sun go down while you are still angry, and do not give the devil a foothold.” (NIV) This verse makes it sound like you can be angry and still not sin. In Psalm 4:4, it says, “Be angry, and do not sin; ponder in your own hearts on your beds, and be silent.” Again it states that you don’t necessarily need to sin to be angry. If we just stopped with those verses we might be left a little confused.

However, there is one more thing I want us to look at. In the first few books of the New Testament, there’s a story that talks about when Jesus entered the temple in Jerusalem. In John 2:13-16, it says, “The Passover of the Jews was at hand, and Jesus went up to Jerusalem. In the temple he found those who were selling oxen and sheep and pigeons, and the money-changers sitting there. And making a whip of cords, he drove them all out of the temple, with the sheep and oxen. And he poured out the coins of the money-changers and overturned their tables. And he told those who sold the pigeons, ‘Take these things away; do not make my Father’s house a house of trade.’” Jesus, a sinless and perfect man, God made flesh, became angry. He used a whip to get people out of the temple.

So it’s true he was angry, but he never sinned and here’s why. His anger was justified. The temple was where people would worship God. It was the house of the Lord, and the people had turned it into a marketplace. Think about it. How would you feel if someone came into your house and started to trash everything inside. Those people in the temple had sinned against God, and God hates sin.

THAT is how anger is supposed to work, but because we’re fallen and human, so we’ve twisted it. We use anger to turn on ourselves and each other, but that isn’t how anger was meant to be. To be angry without sinning is to hate the sin, as God does. But when we overstep, and that anger turns into a judgment of others, we sin, because only God may judge. So yes, it is very easy to sin when we get angry, but that isn’t its true form.