How our Missouri Synod Lutheran church addresses  the problem.

We are a Lutheran ministry working with homeless families through permanent housing, counseling, and home-based case management. We believe that every individual created and loved by God deserves to be treated with dignity and given the opportunity for a new start.

Humanitri is a not-for-profit 501c3 organization deeply rooted in Lutheran ministry through the Missouri Synod.

A SHORT HISTORY OF HOMELESNES IN THE UNITED STATES

Appendix BThe History of Homelessness in the United States

HOMELESSNESS THROUGH THE EARLY 20TH CENTURY

When first used in the United States in the 1870s, the term “homelessness” was meant to describe itinerant “tramps” traversing the country in search of work. The primary emphasis at this time was on the loss of character and a perceived emerging moral crisis that threatened long-held ideas of home life, rather than on the lack of a permanent home. One religious group described the problem as “a crisis of men let loose from all the habits of domestic life, wandering without aim or home” (DePastino, 2003, p. 25). The solution to homelessness today is often perceived to be the creation or availability of affordable housing, but during the early 20th century, jobs (rather than housing) were viewed as the solution to the plight of transients wandering the country.

Fewer than 7 percent of Americans lived in cities prior to the 1820s (Kim and Margo, 2003). Growing industrialization in the 19th century brought a steady migration to urban centers such as Boston, New York, and Philadelphia, and vagrancy records suggest a rise in the numbers of those in search of work in these cities. The Industrial Revolution ushered in a shift from the individual living and surviving on farms or working in skilled trades to the wage-earning worker dependent upon wealthy employers. By the 1850s, lodging rooms for vagrants located in police stations served as the major shelter system, and most major cities reported increasing numbers of vagabonds (Kusmer, 2002).

After declining briefly after the Civil War, homelessness first became a national issue in the 1870s. Facilitated by the construction of the national railroad system, urbanization, industrialization, and mobility led to the emergence of tramps “riding the rails” in search of jobs. Jacob Riis, the Danish-born social reformer and muckraker whose later photojournalism depicted the deplorable lives of those in slums and tenements, arrived in America in 1870 at the age of 21 and described his subsequent 3 years as a member of “the great army of tramps” seeking work across the country. This “army” of overwhelmingly young, able-bodied, white men created a culture that blended the search for work with a love of the open road and a disdain for the constraints of workers in industrialized America (DePastino, 2003). Willing to embrace hard work, they constituted a counterculture with rules and habits that often engendered the wrath of mainstream society. Francis Wayland, the dean of Yale Law School, wrote in 1877, “As we utter the word tramp there arises straightway before us the spectacle of a lazy, shiftless, sauntering or swaggering, ill-conditioned, irreclaimable, incorrigible, cowardly, utterly depraved savage” (Wayland, 1877, p. 10).

The word “hobo” first appeared in the 1880s in western America and softened the public’s perceptions of tramps. This culture of migrant laborers was often romanticized in American literature, including by writers such as Walt Whitman, Bret Harte, and Sinclair Lewis. Jack London wrote vivid depictions of the “call of the road” as an escape from the oppression and monotony of factory work (Etulain, 1979). The storied hobo culture, popularized in the 1920s as “hobohemia” by Chicago sociologist and former tramp Nels Anderson (Anderson, 1923), faded as companies began to value loyalty and longevity and as seasonal jobs began to be taken by immigrant farm workers.

World War II emerged as an economic engine that put the nation to work. Over the ensuing three decades, the typical individual experiencing homelessness continued to be disproportionately white and male but became increasingly older (usually over 50 years old), disabled, dependent on welfare or social security, and resided in cheap hotels, flophouses, and in single room occupancy hotels (SROs) located in the poorest neighborhoods and Skid Row areas of urban America (Rossi, 1989). Ironically, these people living in SROs and rooming houses during this period would be considered “housed” under HUD’s current definition of homelessness. This observation underscores the difficulty in defining and studying homelessness throughout U.S. history.

THE MODERN ERA OF HOMELESSNESS

The early 1980s marked the emergence of what now may be considered the modern era of homelessness. Major forces that changed the complexion of homelessness in the modern era include gentrification of the inner city, deinstitutionalization of the mentally ill, high unemployment rate, the emergence of HIV/AIDS, an inadequate supply of affordable housing options, and deep budget cuts to the U.S. Department of Housing and Urban Development (HUD) and social service agencies in response to what was then the country’s worst recession since the Great Depression (Jones, 2015). In some cities, property values increased dramatically in the areas near downtown, and Skid Row areas disappeared as the SROs and rooming houses that were home to thousands of transients were razed or converted into apartments and condominiums. Since the 1980s, rents in metro areas across the country have been increasing while wages have stagnated (Katz, 2006). Recent research indicates that families experiencing homelessness are more likely to continue to face poverty and homelessness in the future (Desmond, 2016).

Deinstitutionalization of the mentally ill has roots in the civil rights and civil liberties movements of the 1960s, which envisioned more fulfilling lives for those who had been languishing in understaffed psychiatric hospitals through new medications and robust community-based services. The number of patients living in state hospitals dropped from 535,000 in 1960 to 137,000 in 1980. California saw a dramatic reduction in state hospital beds from 37,000 in 1955 to 2,500 in 1983 (Flynn, 1985). Funding for the needed housing and community-based services proved inadequate, and, as cheap housing disappeared, vast numbers of previously institutionalized individuals with severe and persistent mental illness or those who might have gone to institutions in earlier eras drifted onto the streets and into temporary shelters.

The recession of the 1980s resulted in deep cuts to the HUD budget, which decreased from approximately $29 billion in 1976 to approximately $17 billion in 1990, and led directly to reductions in the budget authority for housing assistance (from almost $19 billion in 1976 to about $11 billion in 1990) and in subsidized housing for poor Americans (OMB, 2001). Two changes in policy particularly contributed to the rise in homelessness during that period. First, cuts in Supplemental Security Income (SSI) in the late 1980s, accompanied by a tightening of the disability eligibility process (Social Security Act of 1980), adversely affected mentally ill persons living in rooming houses. The subsequent loss of personal income contributed to homelessness for many of these individuals (Collin and Barry, 1987). The Social Security Disability Benefits Reform Act of 1984 was later enacted to pull back on some of the aspects of the 1980 Social Security Act, which impeded the efforts of some individuals experiencing illness and homelessness to pursue benefits. Second, public inebriation was decriminalized in many cities, and those once jailed for public drunkenness now avoided arrest and often entered shelters or remained on the streets (McCarty et al., 1991).

Homelessness and the HIV/AIDS Epidemic

Another major factor that increased the numbers of individuals experiencing homelessness during the 1980s was the HIV/AIDS epidemic. Culhane and colleagues (2001) presented data from the city of Philadelphia indicating that the two conditions, AIDS and homelessness, “frequently co-occur” (Culhane et al., 2001, p. 515). Those shelter users who were male, substance abusers, and diagnosed with a serious mental illness often had a co-occurring AIDS diagnosis due to risky behaviors such as sharing needles for intravenous (IV) drug use (Culhane et al., 2001). The authors also noted that Philadelphia shelter utilizers had nine times the risk of having AIDS compared to the general population.

Lebow et al. (1995) noted from their retrospective cohort study comparing housed individuals with AIDS and individuals experiencing homelessness with AIDS in Boston that the unhoused men with AIDS were more likely to be African American or Latino and be IV drug users when compared to the housed men. The authors noted that IV drug use was a common risk behavior for the homeless men when compared to the housed men. Further, “given the increasing number of AIDS cases among IV drug users and people of color in general,” it was observed that intravenous drug use may be at least partly responsible for the higher number of AIDS cases in the population of individuals experiencing homelessness (Lebow et al., 1995, p. 295).

In response to the co-occurrence of AIDS and homelessness, the Office of HIV/AIDS Housing in HUD was created in 1990 to manage the Housing Opportunities for Persons With AIDS (HOPWA) program under the Cranston-Gonzalez National Affordable Housing Act (P.L. 101-625). The program was created due to inadequate housing resources for low-income people living with AIDS, who also faced difficulty obtaining supportive services and experienced discrimination (GAO, 1997). HOPWA funds are provided to eligible states and cities based on a formula; there is also a small competitive grant program.

The confluence of these and other events changed the face of homelessness yet again. The typical homeless person of the 1980s was younger (less than 40 years old), more impoverished, and had a higher burden of co-occurring medical, mental health, and substance use disorders than previous generations of persons experiencing homelessness. For the first time, women and families appeared in significant numbers (Rossi, 1990). Shelters that had long served poor and older alcoholic men withstood a new and eclectic wave of impoverished men and women displaced from their homes, many of them struggling with undue burdens of co-occurring medical, psychiatric, and substance use disorders. Many others were simply living in poverty. Sociologists referred to this generation as experiencing “literal homelessness” with no access to conventional dwellings, such as houses, apartments, mobile homes, rooming houses, or SROs (Jones, 2015).

How were the hobo homeless different then the Homeless  today.   Like today  the emphasis on curing the hobo problem was to attack the symptom and not the cause.

https://haenfler.sites.grinnell.edu › hobos
By the 1890s, hobo culture had formed in the working classes of America. … By 1910, there were more than 3 million hobos. 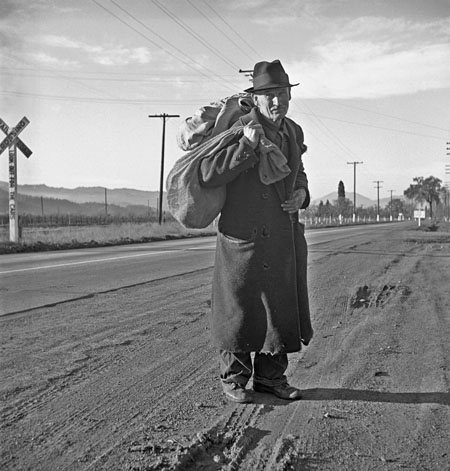