Taking trash from a dumpster or dumpster diving in itself is not illegal. A United States Supreme Court ruling in 1988 (California vs. Greenwood) concluded that trash left outside a store is a part of the public domain. In other words, a store whether it intended to or not has ceded control of its garbage by placing it in a dumpster.We are not attorney’s check with your attorney for a professional legal opinion. 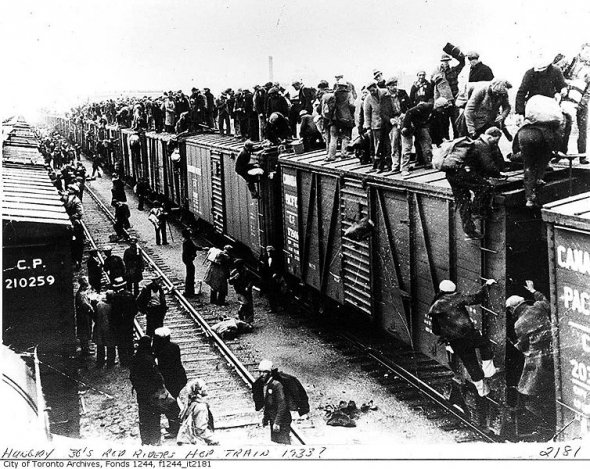 homeless way of traveling  in the 1930’s

The homeless of the past were hobos tramps and bums.  Todays homeless don’t have specific labels attached to them they are just ignored and viewed with suspicion.  This article comes from

THE HOBO. Golden Rule Jones  used to tell a story that might help  Jack Lait and others understand the hobo. Once a man got out of worin a small town. Not because he didn’t want to work, but because there wasn’t enough work to go around, and he couldn’t get enough to keep him going. He thought he would work on to the next village and ‘look for work there. But he didn’t find work there, and kept on his way. He wasn’t a bum. He wasn’t a loafer. He was as good as the rest of the people in his home town, but there was no place for him. He walked, or tramped if you please, because he hadn’t the money for railroad fare. , He was willing to  work and did work when he could get work. So much for the hobo end of the story. But .here’s the part of it that I enjoyed most It so hap pened that our honest hobo friend was hungry one day and without money to buy food. He knocked at the front door of a neat appearing house and a preacher came to the door. Our hobo said he was hungry and would be glad to saw wood or do any other chore to pay for some thing to eat. The preacher asked  him numerous questions about who he was, what he did, where he came from, all of which the hobo willingly answered. Finally the preacher asked: “Do you ever pray, brother?”

Brother Hobo admitted that he did not, but had no objection to praying if he thoughtit would help get him work and food. Seeing that Brother Hobo’s soul wasn’t wholly gone and might be saved with little effort, Brother Preacher handed out a little sermon on prayer and told Brother Hobo to go to the back door and Brother Preacher would bring him a sandwich. At the back door the sandwich was delivered and then the hobo, who had been thinking, said to the preacheri “Jyst a few. moments ago you called me brother. Am I your brother?” “Certainly you are my .brother,” gently replied the preacher. “All men are brothers. We are “all chil dren of the same God and alike we partake of the bounty of His infinite
love.”

This impressed the hobo. Hungry as he was he meditated, holding his hand the backdoor sandwich.

“And I am really your brother?” he
asked. Again Brother Preacher i assured him. “Why, certainly you are my brother,” and the good man beamed as he said it.

At last the truth dawned upon the poor brother who was looking for work. He looked at the preacher, at the back door, at himself, at the sandwich in his hand and then again at the preacher. And he said:
“Well, brother, if I am really your brother and you are My brother, don’t you thing it’s a pretty cold deal for you to give your brother this
backdoor handout, instead of invit ing your brother into the house to sit
down at the family table to a square meal?”

And the pious brother was shocked at the lack of understanding, not to say the base ingratitude of the hobo brother, .who was almost foolish enough to believe that the preacher meant what he preached.

This is our  Ministry News and thoughts section.   Its an entry point to our overall Homeless  and low income Ministry program.  Its intent to provide  news about Homeless  and low income issues , thought provoking Video’s and articles about homeless life and be a place where homeless advocates and agencies can express their opinions. It is also a place for those agencies and individuals that seek to help those with low income
We need to remember that low income is the door that often leads to being homeless.

The poet F Scott Fizgerald made a comment about the rich

“Let me tell you about the very rich. They are different from you and me. They possess and enjoy early, and it does something to them, makes them soft where we are hard, and cynical where we are trustful, in a way that, unless you were born rich, it is very difficult to understand.

He could have added another line “the poor and homeless are also not like you and I.
We need to remember that as we minister to them.

THE  STORY OF BILLY

Many years ago there was a young man and his family of four.  Billy  was a hard worker not addicted to anything but hard work.  We first met him in a tiny 16 foot trailer with no heat or electric.  He paid a $175 a month rent on this worn out hovel.

Our church was wealthy and had good people who helped our ministry.  One day the church announced a retreat for youth and they invited Billy’s 15 year old daughter to come to the retreat, there was no charge.  I got her a sleeping bag and Billy and I took her to  the drop off point.

She was excited.  Billy opened his wallet and took out a $5 bill and gave it to his daughter she had not expected that and a  look of pleasant surprise came over her face when her Father said “take this but spend it slowly.” He could not really afford $5 but he did it.  I was tempted to give her a $20 but  He was a proud man and I would have upstaged him. so I didn’t.

She accepted Christ after that retreat.

FROM THE ARCHIVES OF DESERT MINISTRIES

The oldest article in our Archive is dated 1988 when Desert Ministries began and is the predecessor  of our Faith In Action Lutheran Church Az  homeless ministry program.

In their own strange way, Crab and Turtle are kind of cute.

He’s Crab. She’s Turtle. They just celebrated their ninth wedding anniversary. Back in another life, before things went sour, they were sign painters in Wisconsin. They’re religious, they both suffer from epilepsy and they’re militant vegetarians.

That’s all anybody knows about them, except that they insist on dressing alike–an idiosyncrasy that makes it tough for charity workers to scrounge clothing for the couple to wear. Today, they’re sporting matching red T-shirts with pictures of couch potatoes slumped in front of television sets. “Don’t bother me, it’s game time,” the shirts read.

Crab and Turtle are what are known in these parts as “desert people,” a small but growing subset of homeless who prefer the Spartan freedoms of the wide open spaces to the crowded, crime-ridden shelters, parks and food pantries in big cities.

Unlike their urban counterparts, the desert homeless seem virtually invisible and are largely ignored by social service agencies. But experts say that scattered deep in the brush and cactus near the Superstition Mountains east of Phoenix are hundreds of people living permanently in tents, huts or the hulks of abandoned cars and buses.

Crab and Turtle vanished in time but were replaced by others  whose stories are similar.

Today the homeless are refugees  being left behind by a technology world that sees’s them as discards and does not see them as people with a broken heart, overwhelmed by the sadness of their lives.  Each one is at a different stage of their descent into a world pool theycan’t get out of.

VISIT THE REST OF OUR HOMELESS AND LOW INCOME  PAGES

For those who would like to make a donation

Donate to our Homeless Efforts